During the recent storm it was noted that several boats, on both wharves, had the lines attached to power poles adjacent to berths. This is a risky practice and must not take place...

Re: “Proper Mooring Lines” for boats in the Marina

It was noted that on recently during a strong windstorm, that was actually forecast... there were several boats in their slips only tied on with bow and stern lines, there were no spring lines on these boats to stop surging fore and aft in the slips, potential for damage to both boat and wharf. Also many lines were woefully undersized for the vessels being secured.

We would like to remind members that when leaving boats for any time, however short, the boat must be properly secured with bow lines, stern lines and most importantly Bow and Stern Spring lines of adequate length and strength. If your boat breaks it's moorings it could cause major damage to your boat and others, be sure you are tied up properly and then check again!!!

Below is a list of precautions to be followed as a general guide to preparing your boat for adverse to extreme weather and sea conditions. These measures will help prevent personal injury and also prevent damage to your boat and/or nearby boats and docks. 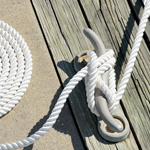 Increasing the number of dock lines means decreasing the chances that a boat will break loose. In the case of Hurricane Fran in 1996, a BoatU.S. catastrophe team that visited the landfall site in North Carolina estimated that as many as 50 percent of the boats damaged could have been saved by using more and better dock lines.

“...the best storm strategy regarding dock lines is to make sure you keep new lines on hand for heavy-weather applications...”

The key to protecting your boat from severe weather is preparation. The Royal Nova Scotia Yacht Squadron has prepared an illustrated sheet of mooring, docking, and equipment security tips to aid in preparing any docked boat for heavy to extreme weather.

“You are ultimately responsible for your vessel and the damage it may cause others.”

Keep up to date with RNYC safety notices and training events.

Subscribe to our Events Calendar to receive boating safety notices and updates.